I’ll be blunt, I used to dislike kids.

Not dislike them as people per say, like as individuals, but when I was younger I just didn’t mix well with kids. When I was in my teen years I would not look after kids unless they were paying me.. I did VBS primarily because all of my friends did it. I was a horrible team helper aaand if you had me as a helper then I am very sorry! Haha but for real, I didn’t put much thought into it in those years but now that I look back on myself, it came down to a lack of leadership skills in my life. I did not want the responsibility of having to look after kids when I had the chance to go play Xbox with my friends instead. Kids were an annoyance to me, because I did not want to have the responsibility of them on my shoulders. #selfishmuch?

Even when I was in my late teens/early twenties, I had my mind set on not having kids because I didn’t like the idea of having to take care of the little brats. What stinkers. But as we know with God, he is the Potter and we are the clay. He patiently molds and shapes our hearts to become more and more like his. He has been working on this heart of stone for 26 years now and there is still so much work to be done. BUT progress has been seen, felt. These days I find myself hanging out with children more than adults here in Haiti. I’d rather talk to and love on the kids that come to our clinics and the like, than talk to adults. The heart of a child is so beautiful. They are so trusting in this culture. If a big scary hairy man sat down next to your child at the hospital in the states you would be concerned would you not? Well the parents of these kids don’t care but what is more important is the kids want to come and meet the large strange man with a big beard. Sometimes they are a bit hesitant or scared to come close but eventually one gets up the courage to come over and when they find they are greeted with a smile and some Creole, the rest soon follow. In many places we go, I am surrounded by at least 4 or 5 children by the end of the day.

As my Father is patiently growing his own love in my heart for his children, I am accepting the company and conversation of children more and more in my life. The love shared with a child by holding their little hands or by hugging them or by sitting with them and letting them hold your arm or sit on your lap is something that has been lost in the privacy, hardness and evil of the US. It’s something that changes your heart little by little every time you experience it. It softens. It breaks down walls of selfishness and pride. It is a beautiful thing. God has used children in huge ways in my own heart and spirit. The cold hard Ben of yesteryear is no longer alive. He has died and been raised again with a heart of flesh. God has done so much work in me. I never would have thought that he would have used KIDS to do it! But, as Jesus said, “Let the little children come to me, and do not hinder them, for the Kingdom of Heaven belongs to such as these[!]” I find myself thinking this very thing now, let the chilluns come to me. Let them play with my beard and hair and feed their intrigue. They are beautiful creations, my brothers and sisters. Why would I ever have hated them? The old me seems so weird. I can now truthfully say that I love kids, by the grace of God alone.

I’d like to take a little time to thank people who God has used to grow me in the area of loving my neighbor as myself.

I need to start with Mary McCormack AKA Lady Mary of SHCP. As the director of the children’s program both when I was a young’un and now as I am a leader in certain activities, I know that Mary had to deal with more than she bargained for when Adam and I were kids. Thank you for your patience and gentleness with me when I was hard to deal with. I know it wasn’t easy. We were pretty crazy.. You have a large part to do with my knowledge of how to lead and love children.

Robert Olszewski aka Robo was my youth pastor at Westerly Road Church. His loving mentorship of me is a large part of who I am today. The foundation that he laid on how to be a man, how to love, how to serve, etc. is what I stand on today.

Robert Tunstall AKA Bobby AKA Boblor as many of you know was the youth pastor who took the place of Rob O. after he left for Minnesota. My relationship with Bobby was at first pretty tough. I was one of the first that he chose to be a youth leader but as I soon discovered by his prompting questions and well of wisdom, I was under qualified. The first two years of his mentorship were quite probably the two hardest years for me spiritually so far in life. There was so much stretching, so much growth and refinement under his leadership. The man I am today I can attribute to his leadership and training of me.

John Watson was the gentlest shepherd I have ever had. He didn’t get much of a chance to mentor me because shortly after he started, he moved. The way he thought intensely about every question I would pose before answering was almost confusing to me. He was the same way when questioning me about life. He was always direct and to the point in everything he said and did. I am grateful for his example to me for that short season in my young adult life.

All the glory and praise belongs to my Great Shepherd. He has put people in my path when he knew I needed it. He is the one who has changed my heart. If it were up to Ben, I wouldn’t be anything near what I am today. I probably would be a monster. But, the grace of God is a mighty thing. If grace is an ocean, I am drowning.

The picture below was recently taken by the talented Laurent Ouzilou at an orphanage in Ganthier. It is my favorite picture ever. 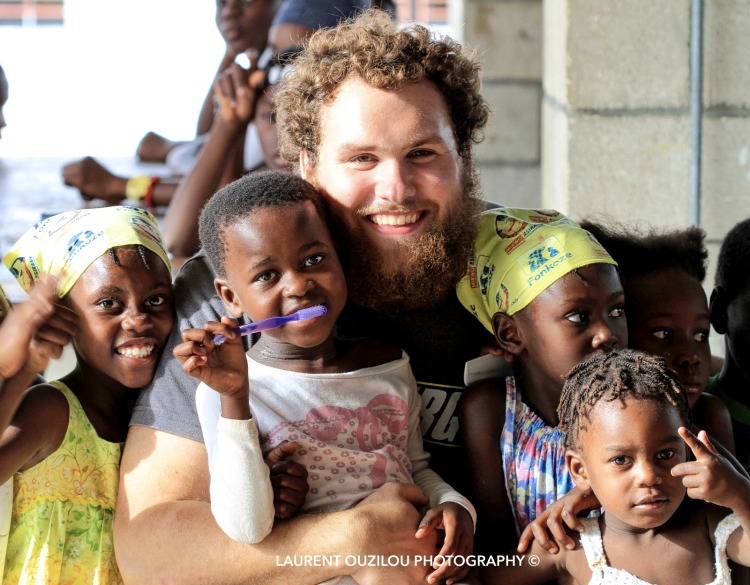 Emanuella shows us how to properly brush your teeth after a presentation on mouth and teeth health by a dentist team member of Konekte Princeton.